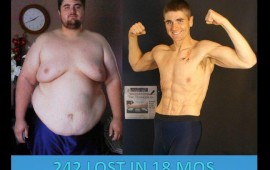 Have your tissues handy.

We have a couple of personal fitness stories to share with you, personal journeys where fitness has taken an integral part, in very different ways.

The theme?  Fitness CAN change you; It can SAVE YOUR LIFE.

Richard Neal (above right, and yes that is the SAME person) had to go to a scrap metal yard to be weighed. He was 426 pounds. Granted, he was eating two large pizzas and a 6 pack for dinner. Fitness had nothing to do with his life. But when he went to see his doctor, he was told he would not see 30. He was 25 years old. Richard was married, but found out that they would not have a family because he was infertile, due to his weight. He was placed on blood pressure medicine. Richard contemplated suicide and had written his note. Then the phone rang. It was his mother. She unknowingly saved his life.

Richard’s insurance agent knew about Beachbody and their products. He kept pushing Richard to try a simple workout video, Power 90, with Tony Horton. Richard avoided and avoided, until he came to the realization that he had to start moving, or he was going to die.

Richard hated that video. He called his insurance agent-coach, who said, “Good. Do it again tomorrow.” And he did. That began the change in Richard. He started practicing what he could every day.

When Richard had lost about 100 pounds, he decided it was time to help others. People who saw him trying to help others judged him, but he didn’t care. He started building a community of exercisers, who would meet at a gymnasium, and they would workout to Power 90 or P90X together.

In 2 years, Richard lost 230 pounds. He got his life back. He got his mobility back. There were no more blood pressure medications. He and his wife even welcomed a baby boy, Brady, last year. And he continued helping people. Richard was awarded $100,000 from Beachbody for changing his life and the lives of others.