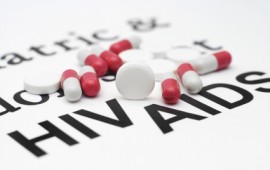 There were a lot of questions about HIV at that time. Many questions were spurred by fear of the unknown. In conjunction with National HIV Vaccine Day, today, many of  those fearful attitudes have changed.

Through research in the 1980’s, we discovered that HIV was not contagious by casual contact, but only by sexual or blood contact. The stigma of the disease at that time was harsh. Some people did not believe that people with HIV should have the right to medicine or other means of help.

In 1991, there was a sudden change in perception when basketball superstar Magic Johnson announced that he was HIV positive. He took a big chance to come out and tell the public about his battle with HIV, but the timing could not have been better. America embraced him and has since continued to support him and his efforts. ESPN has a fantastic documentary called “The Announcement” about the moment we all heard about Magic, and then the change in the hearts of Americans.

We rarely see reports on HIV now, mostly because of the lack of controversy now. We now understand that anyone can contract the disease, either by birth, blood transfusion, or sexual contact. The judgement has lessened, and we see fewer people with symptoms of AIDS. But has the disease been eradicated? Hardly. According to The Body Pro, a website for health professionals working with HIV and AIDS patients, there are currently 34 million people in the world with HIV. 1 million of them are in the United States.

Treatments that began being administered and combined in the mid 1990’s have begun to make a big impact on the life expectancy and quality of life for HIV patients. 2.2 million people died of AIDS in 2006. That number was brought down to 1.8 million in 2010. The President of the United States recently signed a plan to give $63 billion over 6 years to AIDS and HIV research and development.

A pioneer leading the way to end the persecution of AIDS patients, Miss America 2010 Caressa Cameron works with AIDS United and other groups to promote education to prevent the spread of the disease. She

also aims to combat social judgement on people suffering from HIV and AIDS with her work with the FACES project and other charities for public support of HIV and AIDS patients.

“They weren’t ready to hear it,” says Cameron of her early days campaigning for the rights of people with HIV. “There was a wanting to brush it aside and pretend it wasn’t there….but I saw it. I saw with my own eyes the devastation this disease causes, and I decided at the age of eight that it was my life mission to help those with HIV and AIDS.” Cameron is very passionate about her project. At the age of eight, she watched her uncle die of AIDS and had to live with the ridicule of neighbors and even family members who cast her aside for having him in her home.

After becoming Miss America, Caressa Cameron set out to promote her platform: HIV and AIDS education. She brings her message to the schools, including:

She campaigns for research and development in the science labs and radical change in public and community education. Cameron even plans to marry the day before World AIDS Day (which will be December 1, 2012) requesting that all wedding gifts be in the form on a donation to her charities.

So, what about a vaccine to prevent HIV? According to Discover Magazine, that may be a heftier challenge than it seems. With other diseases that we have vaccinated, the disease itself was pretty sedentary. Doctors could see and attack the actual virus. With HIV, the virus actually evolves over time. For scientists to combat the disease, they have to predict the disease’s path and attack with a variety of possible combatants, including a way to stimulate T-cells to combat the virus’s path. According to The Nation, posted on May 11, 2012, there is a promising study in Thailand with a combination of drugs that may increase the body’s immunity against HIV. Hopefully, we will hear about that very soon!