BY SONYA COLBERG  scolberg@opubco.com              Published: June 12, 2011 on NewsOK.com
Olympic gold medalist Shannon Miller recently completed a nine-week round of chemotherapy for a rare, aggressive type of cancer. She is celebrating good news by visiting her family in Oklahoma and sharing her experience with women.

EDMOND — Olympic medalist and hometown girl Shannon Miller is facing a competitor so fierce that she can barely say the word.

With new test results in hand, it appears the 34-year-old gymnast is winning the battle, though victory could have easily gone to her opponent.

Miller recalls that she almost postponed her yearly exam for a year because she was so busy. The gold medalist figured she had remained in good health in the decade and a half since hanging up her gymnastics leotard. She felt fit but decided to rearrange her schedule to work in the exam.

So she was shocked when her doctor announced she had a cyst on her ovary.

She pauses. Her eyes glisten and she laughs before finishing the sentence: “cancer.”

“It doesn’t care how many gold medals you have,” Miller said.

America’s most-decorated gymnast had worked through medical issues during her competitive years. Tendinitis, shin splints, backaches, knee injuries, even a broken elbow just before the Olympics didn’t slow her down. But suddenly she faced a frightening surgery with an unknown, potentially life-changing outcome.

“We didn’t know if they were going to have to do a complete hysterectomy and I would never be able to have children again, or if it had spread, or if it had just been benign and no problem,” she said.

She was diagnosed in January with germ cell malignancy, a rare, aggressive cancer that primarily affects teen girls and young women.

But soon Miller and her husband, John Falconetti, learned that while the tumor was gone, the danger was not.

She was strongly advised to get chemotherapy.

“There’s a goal that’s been set. If it means that this gives me a better chance of being here for my son, then OK let’s do it,” Miller told the doctor. 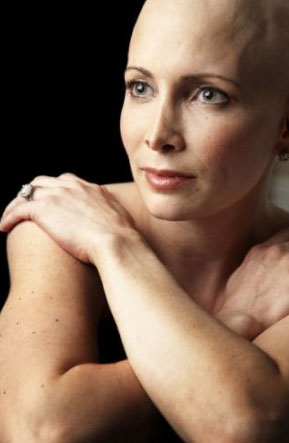 Miller turned toward improving women’s health after leaving behind her competitive years in which she earned seven Olympic medals and nine world championship medals. With nine weeks of chemotherapy ahead, she decided to share her experience with fans on her women’s health and fitness radio show and website, Shannon Miller Lifestyle.

“I wanted to feel like I was doing something for others, not just getting through,” she said.

Suddenly, Miller’s routine revolved around a debilitating chemo schedule that meant a good workout for her was only the occasional five- or 10-minute walk. The once strong, bold gymnast called it a major victory the day she was able to walk Rocco, now 19 months old, to the park near their Jacksonville, Fla., home to feed the ducks.

Fifteen days into chemo, she clung to hope that she’d be in the minority of patients who would not lose their hair.

But instead of fans watching in awe as the Olympic legend slapped chalk on her hands before she jumped on the bars, they watched in awe on day 16 as she had her head shaved during a “wig party” with her husband and close friends.

They called it a celebration of life.

“To this day, I have not watched the entire video. It’s too emotional for me,” she said, her voice breaking. “I just can’t. I can’t look.”

With a gymnast’s determination, she interviewed guests for her live radio show even the first day of chemo, though she had to excuse herself to go be sick. And she posted upbeat musings and photos for her website fans. To their amusement, she wrote: “I’m not sure I can pull off blond but I did find some cute wigs!”

But privately, Miller couldn’t bring herself to look in the mirror at her bald head for several days. Worse, she worried about how her little boy would react when he saw that he had more hair than Mommy.

“I don’t want him to be scared of Mommy. That’s a terrifying thought,” she said.

A friend looked her in the eye and told her if she wasn’t comfortable with being bald, Rocco wouldn’t be either.

That loving scolding made Miller and her husband come to terms with her new look. She spent considerable time looking in the mirror and feeling her bald head.

Finally, with Rocco just learning to walk and to say “hat,” he tried on hats with his mother and discovered that her bald head was just another minor marvel in his unfolding world.

He didn’t even flinch.

“I’m typically a go-go-go girl. And I had to take a step back on the days where I really couldn’t work,” she said.

Sometimes she felt well enough to make a brief public appearance, once inspiring audiences with her composure when she doffed her wig during a national TV appearance.

And she picked up new skills and ideas to share with followers.

She recommends that chemo patients shave their head at the first sign of hair loss in order to reduce the emotional torment. And she talks about putting on false eyelashes.

“I’m still not real good at it. Usually, you’ll see me and I’ve got one good one and one crooked one,” she said, laughing.

But she’s quick to insist that just because she’s got an armload of medals, she’s really no different from anyone else battling cancer.

“We feel like it’s a selfish act when we take time for ourselves, whether it’s to go have some tea and read a book or go get our nails done or go get a workout,” she said. “But you have to make health a priority because if you don’t, you’re not going to be there for everybody else.”

She completed chemo on May 2, and her hair is slowly beginning to grow back.

Her May 27 test results show an all-clear that allowed her to visit her family in Edmond recently and attend her brother’s wedding.

Doctors say she has a 95 to 100 percent chance of no recurrence, though she’ll need frequent testing for several years.

She said she thinks often about how Oklahomans, family and her faith helped her get through the roughest times.

Miller shows that Olympian heart as she explains that she wants people to understand that chemotherapy can be difficult, regardless of who you are.

“You just have a little pity-party. And you cry. And you get angry. And you ask, ‘Why me?’” she said. “You need to have those real emotions.

“I have those down days, too. You pick yourself up and keep going.”