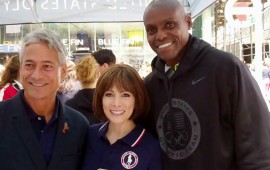 Shannon Miller joined Olympic legends Carl Lewis and Greg Louganis to speak to the crowd during the “100 Days Away” ceremony in NYC Times Square, April 18th, and launch the US Olympic Committee “Raise Our Flag” initiative. 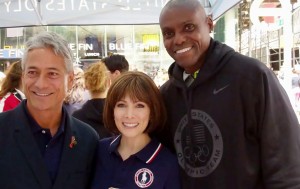 Shannon says, “This was one of the highlights of my entire career! To stand on stage with such Olympic greats, together, announcing the USOC Raise Our Flag initiative was amazing. The entire day was spectacular! I flew into NYC the evening before and there was little hint that something so big was about to happen.

By the next morning Times Square had been transformed into a mini Olympic are with venues for a variety of different sports including trampoline, BMX (yes the actually set up an entire BMX area!), equestrian, artistic gymnastics, beach volleyball, judo and so many more.

Carl (Lewis), Greg (Louganis) and I were supposed to remain a surprise until we took the stage at 10:30am on April 18th, 100 days out from the Olympic Games. When our names were called it was a rush of adrenaline to climb the stairs, walk onto stage and look out over the sea of people crowding Time Square.

It is such an honor to have had the opportunity to dedicate one of the very first stitches in the American Flag that will then be flown over to London and walked during the Opening Ceremonies of the 2012 Olympic Games. I dedicated my stitch to my son, Rocco.

No one wins an Olympic gold medal alone. It takes parents, coaches, community and the support of amazing fans to make that dream come true. Of course we do not reach success in life on our own either.

Please take this opportunity to donate a stitch to someone in your life who has made a difference.

Watch the full “100 Days Away” Celebration for the 2012 Olympics in London video.