Julia Pimsleur, a mother, award-winning filmmaker and bilingual language teacher, had language learning at the top of her own list. She wanted her son to have the opportunity to learn from infancy, but quickly discovered there were no high quality educational materials for teaching little ones a foreign language. As the daughter of Dr. Paul Pimsleur, who created the widely sold Pimsleur Method, she decided to create an easy and affordable multi-media method for parents to use at home. In 2008 she founded Little Pim, the first affordable and entertaining at-home language learning program for children. It launched with Spanish, Chinese and French and now offers 11 languages.

SML: What makes Little Pim different from other similar products?

With Little Pim, families can get their first introduction to a foreign language in a way that is easy, fun and effective. Little Pim’s unique Entertainment Immersion Method® was designed to engage young kids during the window in which research has shown the brain is most receptive to language learning. Building on a child’s natural love of play, the videos blend real kids and animation to provide a captivating full-immersion experience for even the youngest learners.

SML: What has been your most memorable moment since starting Little Pim?

Little Pim’s partnership with One Laptop Per Child, a program out of MIT that sends free computers pre-loaded with educational content to kids in developing countries. In the US brings kids real benefits, but in the countries OLPC serves, learning how to speak English can get an entire family out of poverty.

SML: If you had the chance to go back and give yourself a piece of advice from what you have learned since starting Little Pim, what would it be?

I would have joined a professional development organization earlier. In my third year of running Little Pim, I joined Accelerator, a program run by EO (Entrepreneur’s Organization). It provided me with the essential business training I needed, including how to better manage finances, properly incentivize staff, create unique company culture, marketing etc. This was a game-changer for my business.

SML: What piece of advice would you give to other mompreneurs looking to start their own company?

I always encourage women to think bigger – take risks! If you’re sure you really have a unique product that has wide-scale distribution potential, don’t be afraid to raise capital and make your business as big as it can be.

SML: (Fun Question) If you could have lunch with any mom, living or dead, who would it be and why?

Well, I’ve been reading Mary Poppins, to my boys. So, if we can throw fictional mother figures into the mix, I would definitely love to grab a spot of tea, learn some more about her personal life, and have her do the translation for Little Pim British! 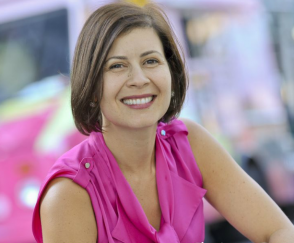 Julia is CEO and Founder of Little Pim, the leading program for introducing young children to a second language at home. She created Little Pim for her own two boys and out of a desire to democratize language learning for kids. Julia grew up in the language teaching business, as the daughter of language teaching pioneer, Dr. Paul Pimsleur.  The Little Pim program has been selling successfully for five years, has won 25+ awards for its proprietary Entertainment Immersion Method®.

Little Pim is one of the few women-led businesses backed by Venture Capital in the country, and Julia is dedicated to helping other women entrepreneurs access growth capital, which is widely seen as one of the the greatest impedements to business success for women entrepereneurs. Julia’s personal motto is “Fortes fortuna juvat” (fortune favors the brave), a message she is taking to women across America through her Little Pim and Forbes blog and more recently, through teaching. In 2013, Julia created the Double Digit Academy “fundraising bootcamp” to help other women entrepreneurs raise Angel and Venture Capital.

Prior to founding Little Pim, Julia was the co-founder and CEO of a women-run film production company, Big Mouth Productions, which produced social justice documentaries sold to HBO, Cinemax Reellife and PBS. Julia’s interest in social change work took the form of fundraising as well as filmmaking, and she drove over $20M in contributions to international human rights organizations.

Julia currently serves on the Advisory Board of Global Language Project, a nonprofit which brings free foreign language instruction to kids in disadvantaged public schools, and as Communications Chair of the Entrepreneurs’ Organization (EO). She started a women’s group within EO, called EO Ellas (Spanish for women in the plural).

Julia earned her B.A. from Yale University, an M.F.A from the French National Film School in Paris and attended Harvard’s Executive Education Program. She lives in Manhattan with her husband and energetic two young boys.