Temper Tantrums: What is a Parent To Do? 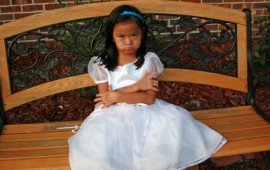 As parents most of us have probably experienced our children having a temper tantrum a time or two!

Where has no bearing on when your child will decide to have a temper tantrum; it could be the privacy of your home, or in the middle of the grocery store isle.

Temper tantrums are a natural part of growing up, leaving you little choice but to find a way to parent your way through them. So calm down — there are ways to prevent or handle tantrums without losing your mind. “Two-year-olds are going to have tantrums regardless. They often occur in settings where parents are setting limits and enforcing them,” says Susan Crockenberg, PhD, professor of psychology at the University of Vermont.

How to respond to temper tantrums:

Tantrums, even if they are infrequent, are inevitable. Try to stay cool and remember these tips for handling a tantrum in progress:

TIP:  The American Academy of Pediatrics says tantrums should be winding down by age 4. If they don’t, it is time to talk to your pediatrician.