USA Gymnastics just announced that nine current and/or former World champion gymnasts will headline the Secret US Classic being held in Chicago May 26th at the UIC Pavillion.

This is the first major qualifying competition being held for the US women! 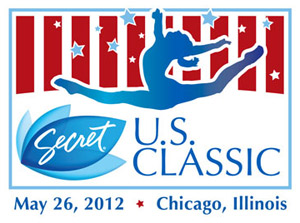 The Goals for Competitors at the Secret U.S. Classic

For those who have been competing regularly like Gabrielle Douglas, McKayla Maroney, Jordyn Weiber and Alexandra (Aly) Raisman this competition is all about consistency and showing Women’s program director, Marta Karolyi that they are working hard on cleaning and refining their routines.

For those athletes from the 2008 Silver medal winning Olympic team that have thrown their names back in the mix, it’s all about showing they are still in the game.  Nastia Liukin, Chellsie Memmel and Bridget Sloan are a few of those returning to competition from a break after the 2008 Olympic Games. Liukin will likely be the most closely watched of those names as the current Olympic all around champion. Look for the amount of difficulty in her routines and focus most on her uneven bar score, that event (currently USA’s weakest as a team) could be her ticket to London!

Those athletes returning from injury, like Rebecca Bross will need to show readiness in their health as well as their difficulty and execution.

Be sure to Watch, as the Secret US Classic is the first major step in grabbing hold of one of only five spots available for the 2012 Olympic team.

I remember the excitement and anxiety that the Olympic year brings. I imagine these athletes have those same feelings. The training is difficult and thinking about the enormity of these next few months can be overwhelming. The best part was the actual competition. Once you are in competition mode you don’t have time to stress about anything else, it’s simply about the skills.

Make sure to get  your tickets to the Secret US Classic.

I’ll be on hand throughout the weekend reporting as events unfold. Secret U.S. Classic tickets may be purchased:

For more information on the competition or athletes please visit usagym.org.

SML TIP:  Check back at shannonmillerlifestyle.com (click on – Road to London) for more updates and links for my blog and video with Yahoo! Sports during Olympic Trials and the Olympic Games!